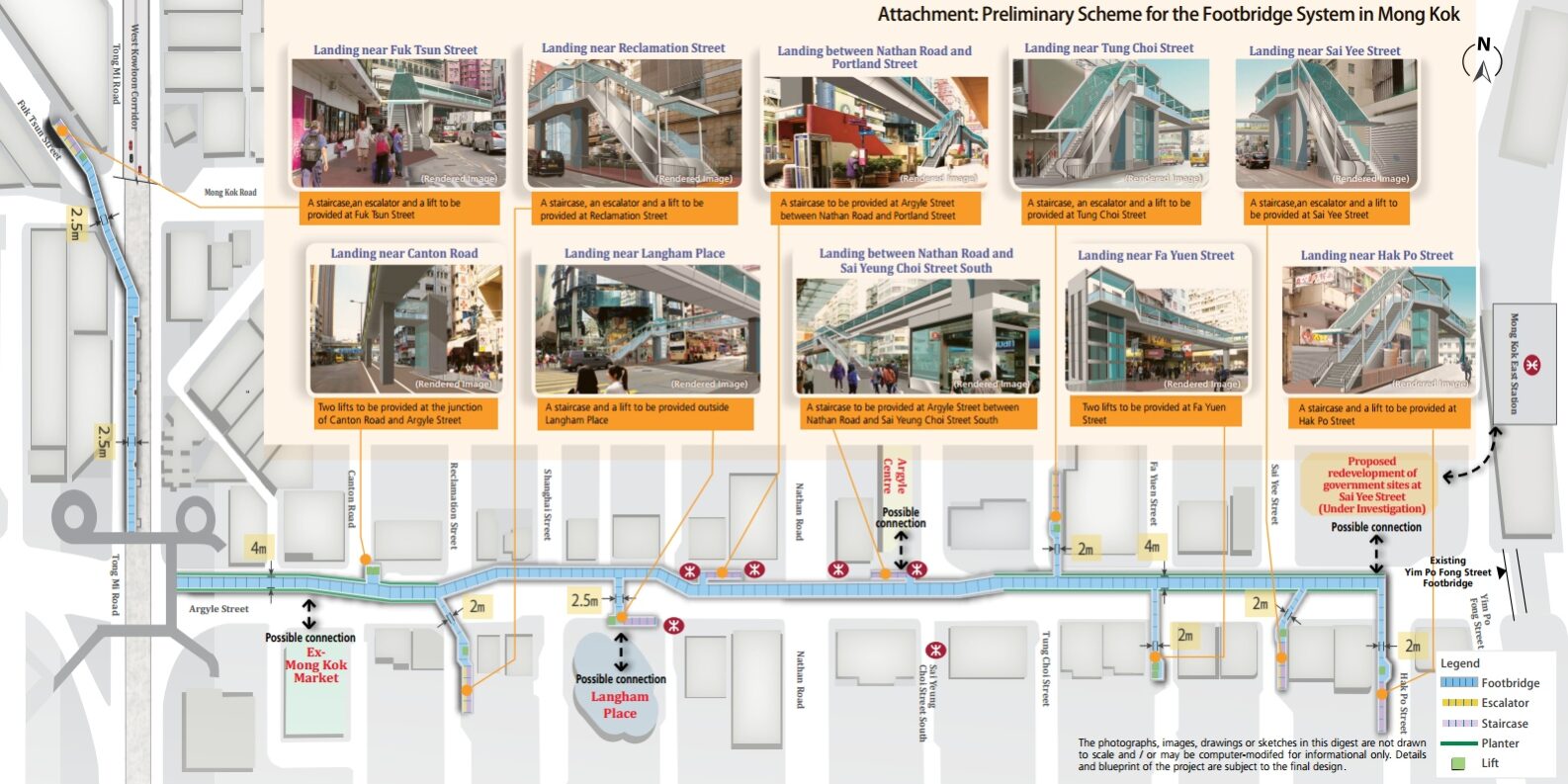 The Chief Executive has pledged in his 2008 Policy Address to improve the pedestrian environment in business districts, shopping centres, and leisure areas with heavy pedestrian flows.

Mong Kok is a busy commercial and shopping district with heavy vehicular and pedestrian flows. Its central area is bisected by Nathan Road and Argyle Street with closely spaced junctions. During morning and afternoon peak hours, footpaths at ground level are barely adequate to serve the high volume of flows and heavy pedestrian movements at the signal-controlled crossings are seriously affecting the throughput of the major roads. Though part-time pedestrianized streets have been implemented in Mong Kok and a footbridge system has been constructed to connect major areas of attraction, such as transport nodes and commercial and shopping areas, traffic congestion still occurs during morning and afternoon peak hours and footpaths remain to be congested. It is therefore considered necessary to further reduce the volume of pedestrians traveling on at-grade level footpaths in order to minimize the vehicle/pedestrian conflicts, thereby improving the pedestrian environment and enhancing road safety.

To the east of Nathan Road, there is already a footbridge system connecting the Mong Kok East station with the Mong Kok MTR station exit near the Trade and Industry Department Tower and there is a plan to extend the footbridge across Nathan Road at Mong Kok Road. This has provided a direct and convenient elevated walkway link between the two stations and has been successful in relieving the heavy pedestrian flow at ground level. However, there is still a substantial volume of pedestrians leaving the Mong Kok East station for the shopping area south of Argyle Street via the footbridge and the signal crossing near the junction of Argyle Street and Yim Po Fong Street, which far exceeds the capacity of the crossing there.

The Tai Kok Tsui area is separated from the Mong Kok hinterland by Ferry Street and Tong Mi Road and connected by an existing footbridge at its junction with Argyle Street. To the west of this footbridge, the developers of the commercial and residential developments are required under their respective lease conditions to provide a footbridge and dedicated public passage within their developments to form an elevated link all the way to the Olympic Station. However, to the east pedestrians have to cross a few junctions in order to reach the Mong Kok MTR station and the shopping area near Langham Place. It is therefore imperative to provide a direct and convenient link to serve pedestrians between Tai Kok Tsui and the hinterland.

Other than the above, the shopping areas at east and west of Nathan Road are now connected by at-grade crossings and subway links. However, the volume of pedestrians crossing at-grade remains high and in conflict with the heavy vehicular flows resulting in generally high accident statistics at major junctions such as Nathan Road/Mong Kok Road, Nathan Road/Argyle Street, and Nathan Road/Dundas Street. This is because at-grade crossings are generally more direct and comfortable than traveling and down the grade-separated facilities. It is necessary to devise alternative means and links across Nathan Road which could attract such pedestrians to use grade-separated crossing facilities instead of the congested at-grade facilities as far as possible.

Mannings (Asia) Consultants Ltd (Mannings) was commissioned by Transport Department to undertake the Study on Improvements to Pedestrian Links in Mong Kok with prime objectives to: